The inspiration for this article came from my visit to the Perot Museum of Nature and Science in Dallas. There is a wall display which shows the importance of energy in the life of human beings and how our civilization’s evolution was codependent with it.

This is an attempt from my side to write down my own discovery of energy. In order to be succinct I will be releasing this article in a couple of parts. The focus is to know how we evolved from tree dwellers to millennials and how Energy evolved with us. Why is there so much pressure on renewables and to move away from fossil fuels? And I think most importantly why can’t we move away from fossil fuels quickly?

Let us start from the beginning. The Big Bang Theory currently depicts the most logical explanation to the origin of the universe. We are talking about a large amount of energy and mass scattered around in a fraction of seconds. The amount of energy that was generated during the big bang is the energy we have currently available in the form of  observable mass and energy (not accounting for Dark Matter and Dark Energy). It seems very strange and improbable, but considering the First law of Thermodynamics (Energy can neither be created nor destroyed) the energy or mass available has always and will always remain constant for the entire observable universe. [1]

It may feel heavenly to know that the energy that you used to run your car today and the energy you got today after eating your meal, actually goes back almost 14 billion years.

Jumping ahead several 13.8 billion years, Homo Sapiens evolved just around the corner from certain ape-like humanoid creatures. At this time Homo Erectus (supposedly the predecessor for human beings)  had already discovered fire. This was a major part of human evolution. Apart from the fact it pre-digested the food which helped in growth of the brain, it also marked the first use of another energy source for humans. It was the first time that a species on this planet started using energy for some purpose other than eating. This means that by the time Homo Erectus slowly evolved into current day Homo Sapiens Sapiens, the need to have an external source of energy was hardcoded in our genes. The necessity to have fire was very deep and profound. Fire helps in cooking, keeping warm, having light in the night and keeping the animals away. The newly evolved human race now knows that their survival depends on this external source of energy. [2]

Considering that the current human species, Homo Sapiens Sapiens, came into existence 300,000 years ago, till then the word energy means 2 things, viz. Food and Fire.

With growth in civilization and living together, the word energy started having more meaning. We slowly needed fire to melt metals like iron, copper, zinc from their ores. We needed heat to make the metals ductile so that weapons, pottery, boat parts, bullock carts, wheel spokes etc. could be made. Slowly as the civilization and cities grew the demand for these items increased the demand for energy. And hence began the industrialization of energy. Coppersmith and Blacksmith, new professions came into existence which were able to make heat and useful things with metals.

The obvious sources of this heat energy (fire) were dry wood and leaves. It must not have taken too long for humans to understand that fat, oil and wax found in animals and plants can act as a potent source for igniting and sustaining the fire for a long time.

Let us try to see how we obtained the 3 most common ways of getting fuel:

Coal: Coal was a slow and sustained mode of heat which allowed control of the temperature as well. Slowly demand for coal must have increased substantially as cities were being established. For centuries to come, coal remained the single most liked source of energy for humans completing our basic primal needs and some evolved needs.

Coal was obtained and is still obtained from large quarries. Since it is solid rock in nature, digging deep down vertically like a well is not a likely scenario. The coal obtained from the side of the mountain or valleys or outcrops would be the perfect source.

Coal layer observed on a fold in a small hill

Crude Oil: Crude oil or petroleum is generally found deep in the earth. Since we know the technology to drill deeper in the earth and extract oil from recognized reservoirs is much recent, the crude oil that crept to the surface in the form of tar sands would have been the only source of oil. Tar sands are found on the surface or just a couple of 100’ below. This would not have been an issue for early settlers to figure out and extract/ use it.

Before we move on let us spend some time on understanding crude oil since it is such an important part of our lives now. But has it always been like that?

Humans must have known of the existence of crude oil for quite some time as it would have crept to the surface at several locations. With some experimentation I am sure that slowly many uses of crude oil would have come forward ranging from burning, coating the utensils and boat hulls to make them waterproof, light oil lamps on streets, adhesive for buildings, make wax statues, oil painting etc. Interestingly crude oil was also considered medicine in some parts of the world. [3]Around 1500 BCE, some civilizations were able to invent distillation apparatus (for distilling clean water, fragrance from flowers, making medicines etc.). This was a major breakthrough. Humans now know that using distillation we can extract many other components from a seemingly impossible mixture. Regardless of the fact that distillation was perfected over several hundreds of years and then applied to crude oil as fractional distillation, this laid the foundation of making crude oil the most dominant energy source for humans in the 20th and 21st century. It was an invention much ahead of its time.

The limited supply of crude oil was enough to suffice the needs in those times. We can blame it on the lack of technology to extract or lack of knowledge to use it, crude oil was never the most sought after source of energy up until the second industrial revolution (which we will discuss later). Coal remained the leading source of energy and still remains so, in a way.

Let’s get back to the storyline.

As the civilizations expanded the demand for more heat and more light grew. People started having lamps inside their homes instead of squatting outside. Development of cities created jobs and economies which led to the requirement of more heat.

By the time cities and international trade relations were established, the evolution of energy had paused. We were content with the sources of energy available to us, coal and wood. From this point onward  we were not looking for a new source of energy, but rather new technology to efficiently utilize what we have. This led to the age of mechanization. It was brought forth by increasing demand for houses, streets, clothes, wood, paper, books and weapons to be built at larger scales. People started building larger machines/ mechanisms using gears and cogs which needed energy to run. There was an obvious requirement of a constant power source and not just a heat source.

The first such source of power identified after several hundred years was “Steam”.

Steam Power was a pioneering achievement which led to a huge shift in the way machines worked. Leading to the industrial revolution in the 1700s we were finally able to not just get heat energy but also increase its intensity through pressure, store it, conserve it, propel it and most importantly keep it under control. The steam power led to the ability to operate large mills, steam boats, quarries, trains etc. This is marked as the first industrial revolution for the human race. From this point onwards, the word energy now not only meant food and heat but also power to run machines. 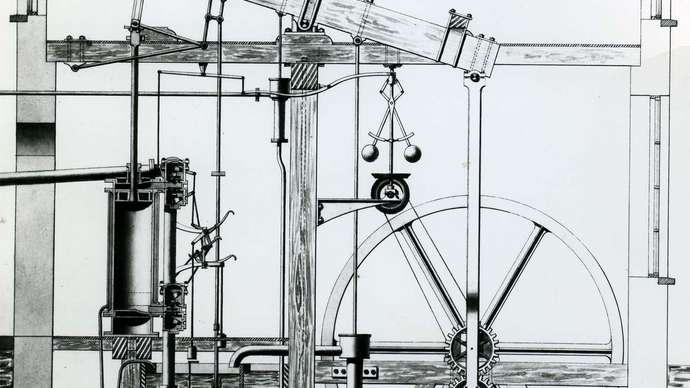 I will not say that this was something which changed us on an evolutionary or genetic level but it certainly led us to a world where we started seeing the luxury for things which were considered to be tedious or next to impossible. For instance long distance travel, lifting heavy weights, making clothes for thousands of people in a day etc.

Steam power reigned the world for several decades ahead. But simultaneously, in those exact decades we entered the second industrial revolution, Electricity. Discovery of electricity, understanding the use of electricity, and drafting ways to exploit this new form of energy was a very fast paced process as compared to fire or mechanics or steam.

In my humble opinion, the discovery of electromagnetic induction by Michael Faraday (or more commonly known as generator/ dynamo) was a turning point in the history of mankind, just like the invention of the wheel or the discovery of fire. Generators allow conversion of one form of energy into another, but electrical energy is something that can be easily transported to far away distances and the infrastructure required is just a thin wire.

All we needed was something to turn the dynamo on and we can transfer the energy to any place and then use it in the form of heat or light. The steam power came to help and thermal power plants became the source of energy for mankind. To this date thermal power plants produce electricity burning coal to make steam which turns the turbine of the generator.

Electricity even changed the way we talk about mechanization. Now the machines need not worry about the source of the power and how much weight the steam boiler needs to carry. They were now designed to simply operate a motor which can be used to get any kind of motion using a mechanism. The word mechanization involved large power ends which would contain boilers and heat exchangers, but not anymore. Machines started becoming smaller and faster.

Looking from a cosmic scale, humans evolved their behavior very quickly from living in caves and burning wood to burning large amounts of coal to heat water and then transfer that heat in the form of electricity hundreds of miles away. The single invention of a generator has brought us to the point where we are. We started with thermal and now are using diesel, natural gas, nuclear, geothermal, wind, water and other sources of energy to produce electricity. All of these have a single thing in common, generators (except, solar which uses photovoltaic cells).

Here is a chart where we can see that for several centuries since the birth of the first homo sapiens we were satisfied with wood and coal as our predominant external source of energy. With the advent of mechanization (which was caused by an increase in demand and vice-versa) we moved to steam power and then electricity. The curve for the demand is very steep as compared to the entire human evolution period.

It is also imperative to note that till this point we have not discussed anything about the implications of the use of energy. It is very recent, even by human terms, that we started realizing the impact of our choice of energy on planet Earth.

We shall discuss these points in the next part of the series, Evolution of Energy.

2 thoughts on “Evolution of Energy-1”